Ugh, a bio – what is this anyway, history class? The ones on books are too short to be interesting, there’s not enough room to tell you that I have a fear of clowns or lay out my three rules of spiders. But hey, this is my blog so I can just ramble on as long as I feel like it! If you want just the dishy bits jump to the quiz at the end.

This is where I write most of the time: 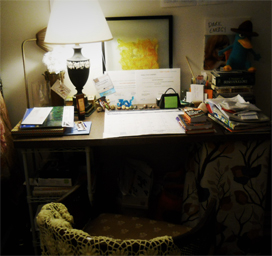 Professionally speaking, I have a B.A. in journalism from Michigan State University with a minor in graphic design.  I’m also attend SCBWI events. While I have spent the last 20 years in marketing (my full-time day job), I did pay my dues for a few years as a reporter. When I’m not writing I enjoy cooking and gardening with my ever-present shadow – our toy poodle Minnie. I’m married to my college sweetheart, a member of my brother floor from freshman year! 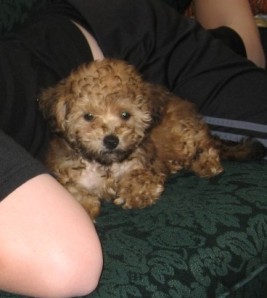 I read a LOT. With a middle-grader and a YA reader in the house I get the best of both worlds. It’s impossible for me to pick a favorite book, so I’ll just give you a random list 🙂

There’s oodles more, of course, but you can totally see my love for amazing heroines!

Since I can’t resist a quiz here’s my bio, presented in the form of 20 questions courtesy of Glamour.com.